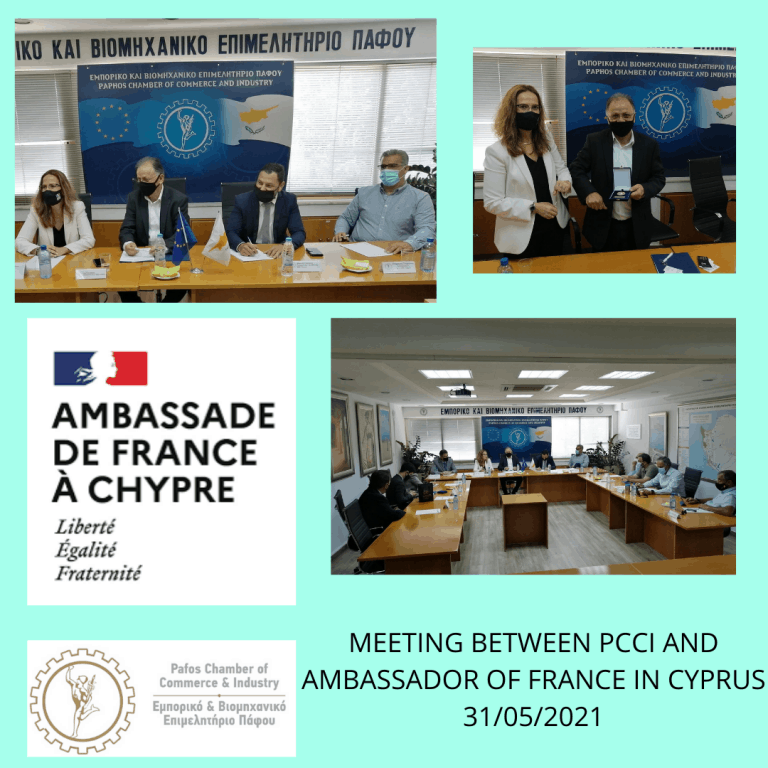 On Monday 31/05/2021, a meeting was held in the Headquarter Offices of the Paphos Chamber of Commerce & Industry among delegation of PCCI and H.E the Ambassador of France in Cyprus Salina Grenet-Catalano. From the side of PCCI the meeting was attended by the President of the Chamber  Mr. Mais Georgios, the Vice-Presidents of the Chamber Mr. Papantoniou Charalambos, Mr. Stephanou Stephanos, Mr.Evangelou Pantelis, Mr. Chrysanthou Chrysis and the Secretary/ Director of the Chamber Mr. Stylianou Marinos.

The President of the Chamber, Mr. Mais extensively discussed with Mrs. Salina Grenet-Catalano both in deepening the existing excellent relations between the two countries and for the prospects of cooperation between the business Paphos community and the business community of France, a country with a population of 65 million but also with great influence in the various International Organizations as well as with a leading role in the European Union.

The President of PCCI expressed his desire to the Ambassador to increase the presence of French Companies in Paphos and Cyprus in general .Except from the aforementioned, they discussed ways of cooperation between the two countries in the fields of  theme Tourism, Education, New Technologies & Innovation and general policy regarding the New Strategy for Tourism creating an identity, 'branding'. Mr. Mais had the opportunity to discuss with Ms Grenet for aid matters of business and trade relations between the two sides and to find ways to attract tourists from France with the first and best to establish more air routes with direct flights from France to Cyprus and Paphos in particular. Moreover, according to data from PCCI in 2018 36.5 0 0 French visitors arrived in Cyprus , while in 2019 the number of French visitors decreased to 31,114 .

The Ambassador Mrs Catalano discussing with the Director of the Chamber as well as attendees Vice-Presidents of PCCI stressed the need for cooperation between the two countries on issues of Capital Investment, Education, Renewable Resource Energy , Culture relying on our long history and brilliant archaeological wealth as well as for investments in Medical field. The Ambassador showed great interest in such partnerships and made special mention of the great archaeological places  that can attract a large number of visitors. Agrotourism, is a sector with potential due to Paphos countryside that we should promote accordingly.

At the end of the meeting , the two sides hinted that Paphos has all the necessary components needed to attract such investments and agreed for further contacts.