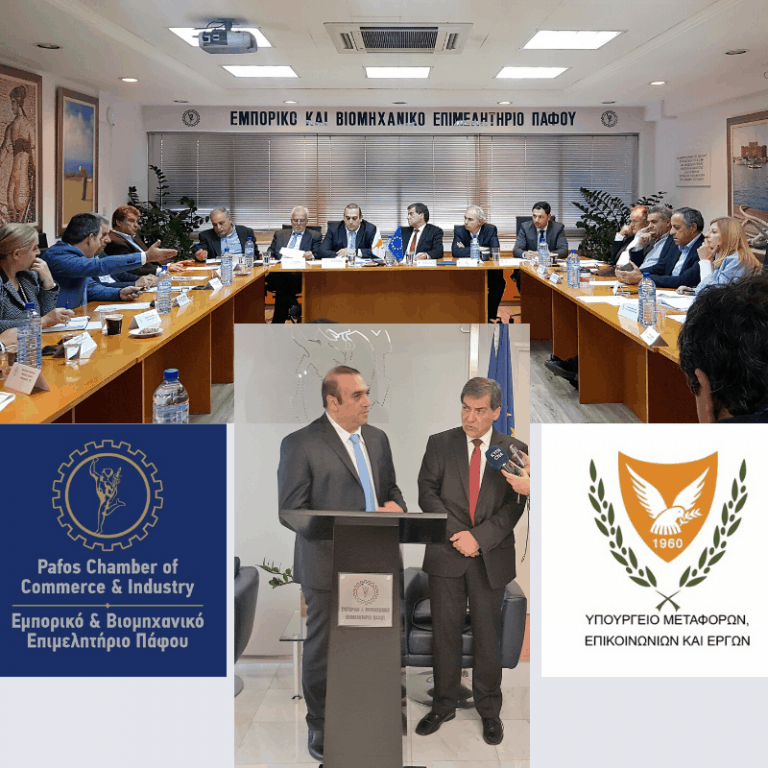 Meeting of the Minister of Transport, Communications and Works Mr. Yiannis Karousos at the Paphos Chamber of Commerce and Industry

The Minister of Transport, Communications and Works, Mr. Giannis Karoussos attend a long-running meeting hosted by Pafos Chamber of Commerce & Industry. At the meeting present was the District Hotel Association, the PRBT, District Members, the Paphos District Officer and the relevant government departments. At the meeting, many proposals were heard, the Minister assured that many of them would be implemented immediately and also referred to the establishment of monitoring committees in all provinces to make the ministry's work easier and effective, as well as close cooperation with other ministries involved in better coordination of efforts.

The main topic of discussion was the processes and new developments for the construction of the new Paphos-Chrysochous road, which emphasized the need to pass laws against appeals to avoid delays in projects of public interest. As the Minister pointed out, 3.2 million will be allocated for improvement works on the existing road and environmental approval and integrated planning is expected to start and implement Phase B of the project.

The President of PCCI Mr. Dimitriadis referred to the Pafos-Airport tourist area along the Ezoussa River, to the Tomb's of the Kings Avenue - Coral Bay tourist area, a request dating back to 1988, but also to the construction and operation of the western Paphos bypass. Concerning the road of the tourist area of ​​Paphos-Airport with the intervention of the PCCI, Minister G. Karoussos was on the spot together with the officials in order to personally identify the problem and the urgent need for immediate implementation of the project. Mr. Dimitriadis emphasized that the PCCI will receive the terms of tender from the Ministry of Agriculture and that a new environmental study will be carried out by the Chamber with instructions from the Ministry and called for an accelerated process.

PCCI Secretary/ Director Mr. Marinos Stylianou referred to the construction of green bridges, Green Infrastructures built throughout Europe and the world at large, an issue which the relevant departments had not taken into account after referring to the usual gray bridges during the studies and stressed that the green design of eco-bridges overcomes all environmental problems. In support of this, he submitted to the Minister a memorandum with extracts from the report of the United Kingdom Environment Committee Natural England (NECR181 | July 2015) but also the Commission's report to the EUROPEAN PARLIAMENT, THE COUNCIL, THE EUROPEAN ECONOMIC AND SOCIAL COMMITTEE AND THE COMMITTEE OF THE REGIONS | Brussels, 24.5.2019 COM (2019) 236 stating such infrastructures accompanied by photographic material. Minister G. Karoussos appeared to be positive about the implementation of the green infrastructure, citing a similar example they implemented in Australia with an eco-bridge for crossing red crabs in a highly environmental area.

In the meeting also has being discussed other serious issues such as the regulatory plan for the improvement of Greek Avenue without a traffic island, the new urban transport contracts for Paphos District as well as significant problems created at Paphos Airport.Mr Mais referred to the need to expand Pafos Airport facilities and in particular the departure lounge, the creation of VIP lounges, the improvement of air conditioning at Paphos Airport and also discussed the problems that have arisen with taxis, the anarchy that prevails, the uncertainty and the issue of tariff adoption.

Finally, regarding the protection of coasts and the creation of beaches, the president of the Paphos Hoteliers Association Mr. Thanos Michaelides emphasized the need to create breakwaters to protect and improve the beaches from the are called 'mbania' Kato Pafos to the Phaethon Hotel, which is still in the Environmental Authorities. In fact, he stressed that with the erosion that is being observed year by year the problems are increasing and if no immediate action is taken both, the Private Sector and the State, will find themselves in a deadlock.