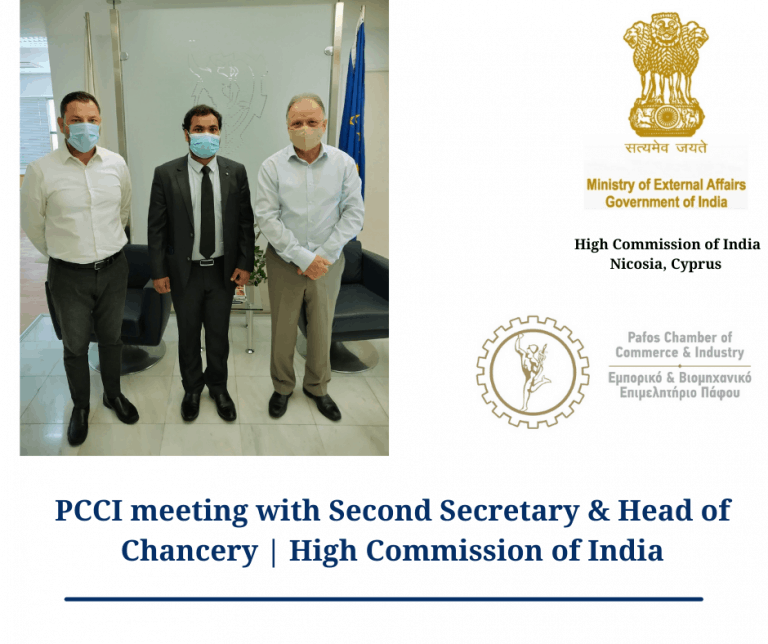 On Thursday 05/08/2021 a meeting was held at Paphos Chamber of Commerce & Industry Offices among the PCCI President and Secretary/ Director Mr. George Mais and Mr. Marinos Stylianoou respectively and the Second Secretary of the High Commission of India in Cyprus Mr. Nandulal Bhookya.

The President of the Paphos Chamber and Mr. Bhookya stressed the need for cooperation between the two countries in Tourism and investment both in the Hospitality Industry and the Real Estates.

Mr. Mais had the opportunity to discuss with the Second Secretary of the High Commission of India in Cyprus issues of strengthening the business and trade relations of the two sides. More emphasis was given to importing/ exporting commodities especially in the field of pharmaceutical goods, fertilizers, steel, and other products. The need for employment of technical and skilled personnel from India was extensively discussed. The two sides analyzed ways to attract tourists from India to Cyprus and Paphos in particular.

According to data from PCCI, economic relations between the two countries show a positive image with good prospects for the future. There is stability between the two states in the field of trade in goods and in services. “The investment sector is what we aspire to stimulate, strengthening the already encouraging data that have been recorded," said Mr. Stylianou Marinos.

Finally, it was decided to take place as soon as possible online meeting between members of PCCI and Indian Companies in an effort to find new forms of cooperation between the two communities and further development of existing ones.

Mr. Bhookya informed us that because of the 75th anniversary of Independence of India that is on 15/08/2021, High Commission of India is organizing a series of cultural events in all cities of Cyprus, including Paphos.