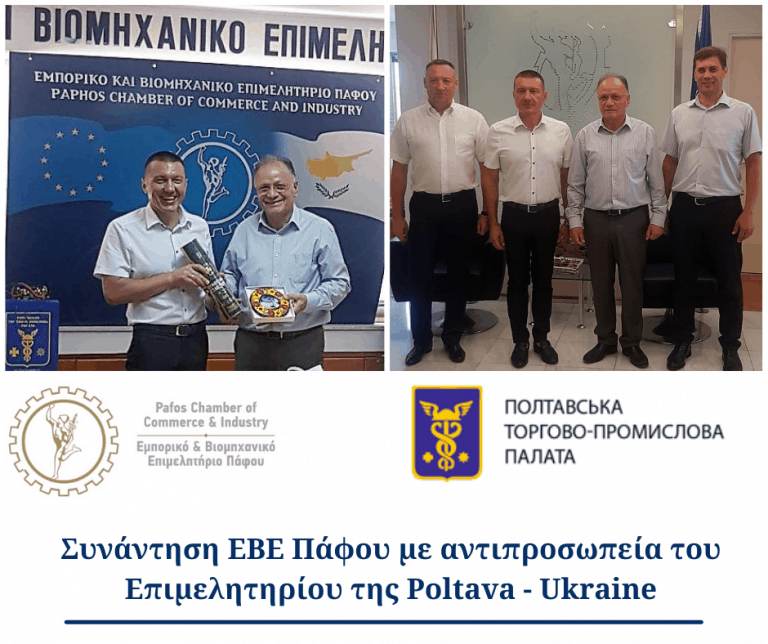 The Paphos Chamber of Commerce and Industry met with the President of the Poltava Chamber of Ukraine, Mr. Borisenko Volodymyr Anatoliyovych, and his delegation, in the presence of the President, Mr. George Mais and the Secretary/ Director Mr. Marinos Stylianou.

The President of the Chamber, Mr. George Mais, after welcoming Mr. Borisenko and his delegation, started the discussion, emphasizing the need to find ways to deepen trade relations between the two regions. Special mention was made of the Covid-19 pandemic, which he said, in addition to the other unpleasant situations it caused, affected the air connection and the tourist flow between the two countries. The fact that Poltava has an airport did not avoid to express its optimism that it is possible the two destinations, with chartered flights, could open a very important channel of cooperation and development between them.

He stressed that there is interest from Paphos businessmen for importing products from Ukraine such as timber, agricultural fertilizers and other commodities, but there are some problems that, it would be good, the Chamber to deal with to solve them. Mr. Mais referred to the problems in the size and volume of the order where many factories, due to the small quantities from Cyprus, do not show much interest in business as well as the problem of means of transport. He also explained that it would be prudent to look for ways to control the quality of goods in order to avoid adverse adventures by traders, thus enhancing the credibility among traders.

The President of the Poltava Chamber showed particular interest in solving the above problems and stressed the need for air connection between the two regions. He also informed that the airport has been recently renovated and modernized in an effort to attract new airlines. Tourist interest is a given where it could be combined with social, cultural and other activities. The Ukrainians are also interested in the field of Real Estate and Investments, where this will be achieved through the contact and the visit of the two peoples.

It was agreed between the two Presidents that a teleconference would soon be arranged with the participation of Paphos businessmen and Poltava businessmen in order to start a two-way business relationship and activity.