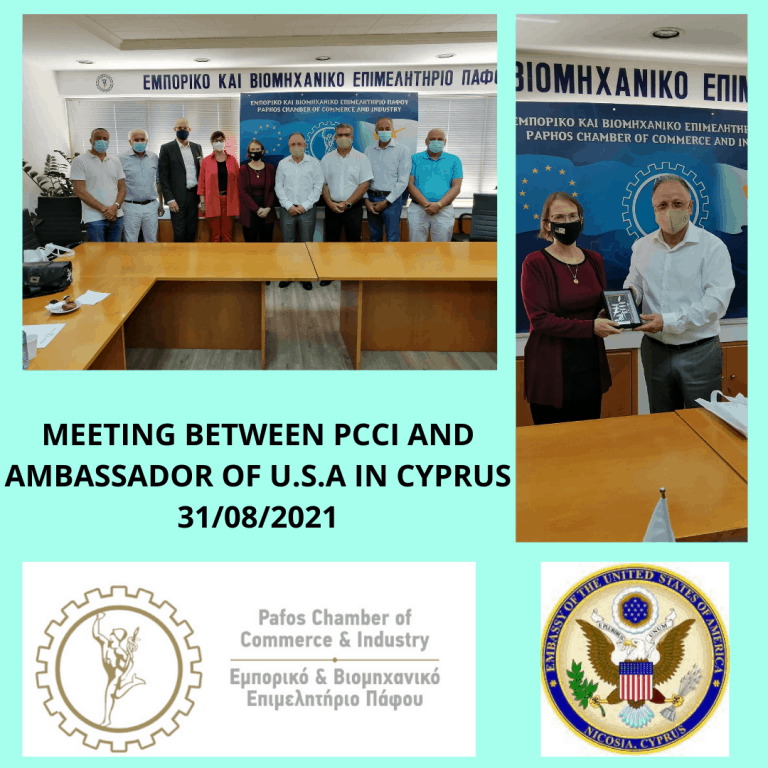 On Tuesday 31/08/2021, a meeting was held in the Headquarter Offices of the Paphos Chamber of Commerce & Industry among delegation of PCCI and the Ambassador of U.S.A in Cyprus Mrs. Judith G.Garber. From the side of PCCI the meeting was attended by the President of the Chamber Mr. George Mais, the Vice Presidents Mr. Charalambos Papantoniou, Mr. Stefanos Stefanou and Mr. Pantelis Evangelou as well as the Honorary Secretary of the Chamber Mr. Zenonas Zenonos and the Director of Paphos Regional Board of Tourism Mr. Nasos Hadjigeorgiou.

The discussion was very productive and focused on the relations between the two countries but also on the prospects that exist for further development and deepening of economic relations.

At the meeting was discussed  the situation prevailing in the local economy and the efforts from PCCI and  the private sector so as to overcome any problems and the negative consequences that caused by the pandemic and manage to continue the positive growth of the province in relation to the implementation of the new projects and the improvement of the infrastructure implemented by the Central State and the Local Authorities.

The USA can certainly play a very serious role in the Cypriot economy but also in issues related to security and peace in the Eastern Mediterranean region , something that will significantly improve the business climate in Cyprus.

The two sides discussed also about Banking sector and the improvements that needs to be done so as to facilitate foreign and local investments and find the ways of cooperation between businesses of the two countries and issues of investment in Cyprus on the part of American companies. Except from the aforementioned, they discussed ways of cooperation between the two countries in the fields of Tourism, Education, Health, High Technologies and Green Development with emphasis on Renewable energy sources.